Skip to content
FREE SHIPPING ON ALL ORDERS OVER $100 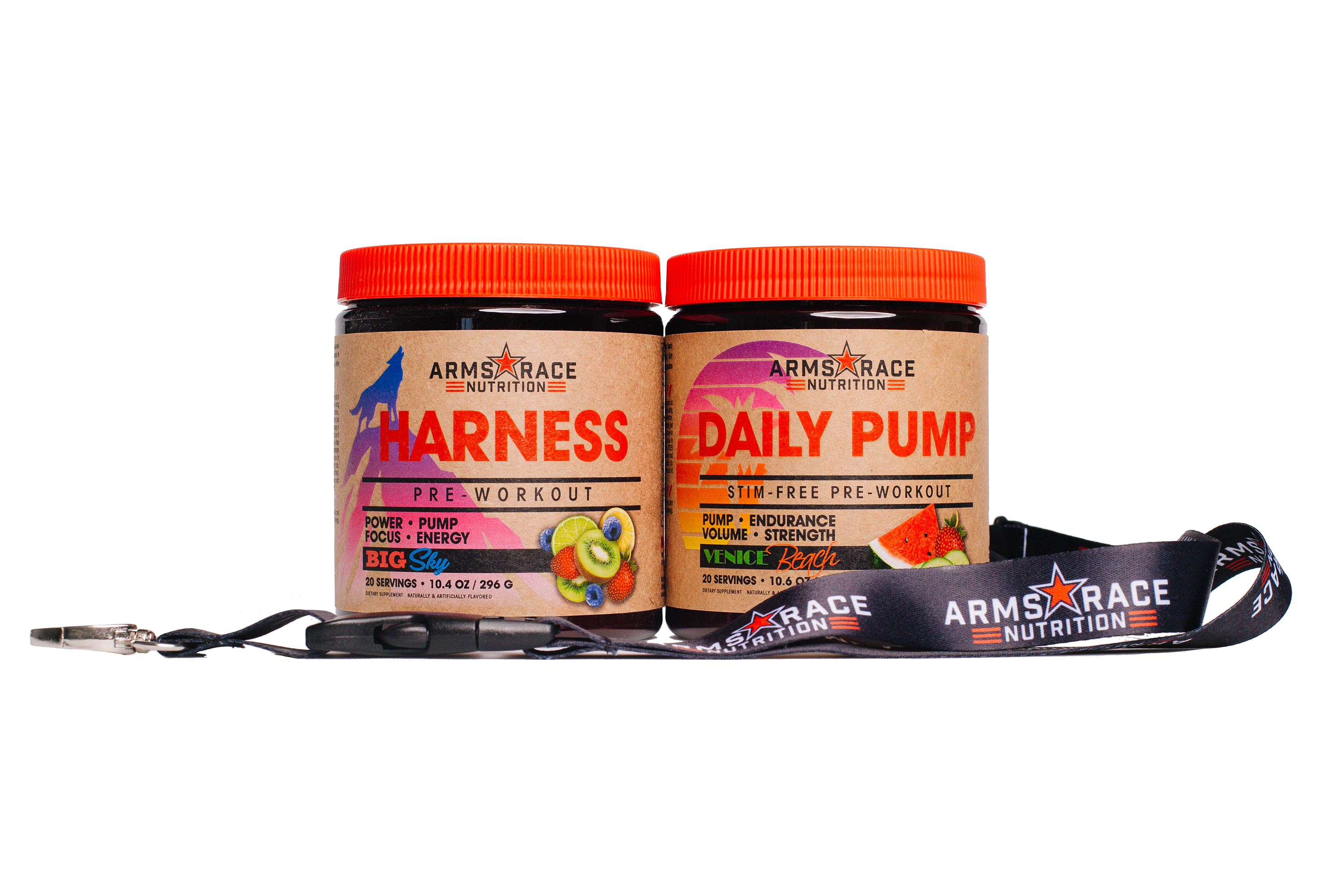 The Ultimate Preworkout Stack
Harness and Daily Pump for $79.99 plus a free ARN Clip Lanyard

To provide any workout an additional, non-stim boost.

It should be simple: the right combination of specifically targeted ingredients for pump, endurance, and strength all blended together to produce a scientifically sound, and complete, non-stimulant pre-workout. It should be, but it isn’t. It is a good thing for all of you then that Arms Race Nutrition will do anything for you. With ARN DAILY PUMP, we put “pump” products into a whole new category. DAILY PUMP contains cutting edge and trademarked ingredients to maximize ALL performance aspects of your workout, minus the stimulants or jitters. †

Typically, non-stimulant pre-workouts serve a single purpose, increase localized blood flow. That is, deliver a “pump.” Not all “pump” products are the same though and most often leave you wondering, did I really get the result I was training for. With DAILY PUMP there is no question, and with a name like DAILY PUMP, we trust our product will perform time and time again on a daily basis.

ARN DAILY PUMP’s main emphasis is what we call a “performance pump” – that is, increasing localized blood flow with a purpose. And the purpose is delivering real, measurable increases to key markers in exercise physiology, such as total time to exhaustion and peak power. We achieve the performance pump in DAILY PUMP by including ingredients that not only increase vasodilation thus inducing the “pump” effect – but do so while delivering real performance benefits. L-Citrulline is well-known to increase blood flow, but it also increases peak power output. ViNitrox™ a trademarked polyphenol blend, has been shown to over blood vessels and drive nitric oxide into the bloodstream. What does this mean? It means that each ingredient in DAILY PUMP facilitates the dual purpose behind the performance pump: delivering you the gratifying feeling of a pump, but also servicing your goal of progression.

Beyond its demonstrable performance benefits, DAILY PUMP also tastes amazing. With so many amazing flavors to choose from, the experience you have from the very first sip until the end of your workout is unmatched.

Vitamin C is not only a powerful antioxidant, but also supports a healthy immune system, protects cells from oxidized particles and free radicals, and assists other physiological functions. The benefits of Vitamin C on the immune system have been extensively studied. Vitamin C’s role in exercise comes due to its high antioxidant levels having the capability to mitigate oxidative stress and muscle damage during the event that can lessen exercise potential. So, while Vitamin C may not have a direct impact as performance enhancer, it does have benefits that allow you to train harder and longer.

Citrulline is a non-essential, non-protein amino acid that forms during the urea cycle and forms ornithine when combined with carbon dioxide. Citrulline is also a critical source of endogenous (natural) arginine, as it is rapidly and efficiently converted to arginine in the vascular endothelium and other tissues.

Citrulline’s benefits have been shown to be greater than its parent compound. While arginine undergoes direct hepatic (liver) metabolism through the enzyme arginase, citrulline bypasses hepatic metabolism entirely and it is delivered straight to the bloodstream. The result is that gut absorption and plasma (blood) bioavailability studies comparing citrulline and arginine have shown two things. First, that citrulline is less readily destroyed and has greater absorption than arginine. Second, that citrulline supplementation increases arginine levels more effectively than arginine supplementation itself.

This translates to promising results. For example, animal studies show a significant increase in anaerobic performance at a 250mg/kg/day serving of citrulline, while studies in humans implicate citrulline in both aerobic and anaerobic performance increases. As a critical part of the urea cycle, citrulline’s performance benefits are thought to be a result of its role in ammonia clearance. Citrulline is implicated in reducing the oxygen cost of muscle processes, along with increasing the rate of post-exercise ATP and phosphocreatine replenishment. As ATP and phosphocreatine are the body’s ‘exercise fuel,’ this may result in citrulline delaying time to exhaustion in aerobic and anaerobic exercise.

In combination with the GlycerSize™ found in ARN DAILY PUMP, citrulline’s potential endurance applications are significant.

Glycerol is a fascinating and highly useful compound that has achieved a somewhat cult status in the fitness community – while both peer-reviewed research and anecdotal reports centered on the endurance functions of glycerol are plentiful, its bodybuilding applications are not as widely lauded. Those who do use glycerol, however, are persistent in their belief that it provides some of the most noticeable, and effective, engorging (“pump”) effects possible.

Glycerol has been well-established as a so-called, “hyperhydrating agent” because of its ability to potently and positively affect plasma (blood) osmolality. As an incredibly powerful osmotic agent, and when combined with large quantities of water, glycerol induces the intracellular retention of fluid (not the extracellular kind, you do not want) that would otherwise be renally excreted. Various research has shown that glycerol’s capacity to positively affect osmolality and expand fluid volume (an increase in total body water) has beneficial effects on performance and physiologic function.

Studies that administered glycerol before both moderate and high endurance fitness tests found that glycerol reduced increases to core temperature, caused athletes to exercise significantly longer before fatigue, reduced urinary elimination of water and increased total body water content, and, in several studies, significantly improved intramuscular water expansion. In less complex terms, this means glycerol has been demonstrated to keep your muscles hydrated, significantly increase the ever-desired, “pump effect” of muscle engorgement, and, maybe most importantly when it comes to a supplement formulation, deliver and keep more nutrients where they are needed (inside the muscle).

Until recently, however, most of these studies noted a significant drawback: the low glycerol concentration of market-available glycerol products forced researchers to test glycerol loads that were significantly higher than average use cases. ARN Daily Pump uses GlycerSize® to overcome precisely this problem.

GlycerSize® is a highly-concentrated (65%) form of glycerol that offers greater water stability, and therefore potency, as compared to standard GMS (glycerol monostearate). Of particular interest to bodybuilders, GlycerSize®’s greater potency translates to even greater levels of intramuscular water retention – keyword, intramuscular, and therefore no bloat – over GMS.

Overall, supplementation with GlycerSize® has been shown to:

Betaine (trimethylglycine) is found naturally in most living organisms. It is well known to protect non-mammalian animal life in conditions of osmotic stress (a rapid change in the amount of solute surrounding a cell), in addition to functioning as an osmolyte in mammalian (including human) tissues\. Betaine is formed in cells as an oxidation product of choline and can be obtained in the diet from foods such as spinach and beets.

Though data on betaine is limited, and recent, the available literature suggests that this compound may have effects in a number of areas. Studies on betaine using servings as little as 1.25g/day and up to 5g/day for up to 14 days have shown promising results. In one study, a 2.5g/day serving was found to enhance endurance and total repetition volume for the squat, bench press, and jump squat in in healthy-exercised trained adults. A similar study using the same serving found that betaine use increased peak power and maximum peak power, along with force and the maintenance of both force and power in healthy, exercise-trained subjects.

Perhaps more interesting, however, is a study which examined betaine’s effect on the endocrine system. This study revealed that betaine may exert an effect on several endocrine processes given the proper conditions, causing the authors to hypothesize that long(er) term betaine supplementation may increase the hypertrophic response to resistance training.

In an absolute sense, both inorganic and organic nitrates also possess benefits beyond a secondary NO-production pathway. Studies in athletes have demonstrated that nitrate ingestion prior to both aerobic and anaerobic exercise meaningfully increases both delay to fatigue and total work capacity – likely a consequence of nitrate’s activation in hypoxic (oxygen-deprived tissues). Nitrate effectively reduces the oxygen cost of muscular activity, making contractions more efficient.

ViNitrox™, a unique blend of grape and apple polyphenols, has been studied extensively for its benefits on performance. Polyphenols have often been touted for their ergogenic benefits on exercise and recovery. During endurance events, often involving high intensity exercises, the body generally becomes fatigued and no longer able to perform at the highest capacity. Muscle fatigue is often multifactorial and often associated with physiological parameters such as reduced neural input, the buildup of lactic acid, and the production of oxidative free radicals. These factors can negatively impact exercise performance. Polyphenols are compounds known to provide free radical fighting antioxidants that can mitigate this oxidative stress placed on the body during these events. These polyphenols have also been shown to increase nitric oxide levels in the blood, which has a direct correlation to power output and muscular strength. Nitric oxide is a natural molecule that has the primary job of inducing vasodilation, or the widening of blood vessels. When blood vessels dilate it allows for more blood flow to the working muscles as well as lowering of blood pressure. This allows for more nutrient rich blood to be delivered in a more efficient manner, which can increase muscular strength and endurance through the duration of the event. Several studies have been conducted on ViNitrox™ efficacy and have shown promising results. One study conducted on 50 athletes concluded that the athletes taking 500mg of ViNitrox™ per day showed both increases in physical training time (10%) as well as a significant decrease in oxidative stress (74%). These results are promising for ViNitrox™’s benefits when it comes to overall improvements in training outcomes.

We didn't just stamp Julian Smith's face on the brand. He uses Arms Race Nutrition stacks everyday to power his training and maximize his success.

Every ingredient, every formula has been specifically selected to maximize your success.

Any purchase of $100 or more qualifies for free delivery.

Our products are scientifically-formulated and produced in cGMP facilities.

Not satisfied? Let us know and receive your money-back within 30 days.